57 minutes
"A Daughter's Love" is the second Holy Tuesday episode of the 2018 edition of the annual drama anthology Eat Bulaga's Lenten Special. It succeeds the episode "Pamilya" in the Tuesday lineup. The episode aired on 27 March 2018 with a total runtime of 57 minutes.

Directed by Ricky Davao, "A Daughter's Love" tells the story of a grief-stricken widow who is going through severe depression and her daughter who will do everything to make sure that their family will weather the storm.[2]

Grief-stricken Tina (Nora Aunor) refuses to accept the death of her husband by living her everyday life as if he was still in the room. One morning during breakfast, Angel (Ryzza Mae Dizon) observes her mother talking to the empty chair where her father used to sit. She tells her mother the cold, hard truth that her father is no longer with them, causing Tina to have an emotional breakdown.

Close relatives explain to Angel about her mother's depression. Angel offers to quit school in order to take care of her mother. They immediately reject her idea and assure her that they will take care of Tina instead.

At school, Angel receives a warning after arriving late to school. Her teacher tells her that she needs to improve her attendance record in order to keep her valedictorian status in class. Angel's classmates spread rumors that her mother is mentally deranged. Angel cries and asks them to retract their hurtful words.

Meanwhile, Tina sees that Angel has forgotten her hairbrush at home and promptly decides to go to her daughter's school. She forces herself to enter the school grounds, but gets stopped by security guards. Tina further causes a scene by talking to her deceased husband which other parents and other schoolkids witness. The school's parents complain that Tina should be put in a mental institution, while the schoolkids start avoiding Angel.

Back at home, Angel has an emotional outburst by begging her mother to help herself recover from the condition. Tina sees her daughter's cries, but remains helpless. Angel prints out information about her mother's depression, promising her mother that she will not give up caring for her. Tina later reads Angel's printed research, causing Tina to begin to understand her condition and to reflect on her actions.

Tina apologizes to Angel and promises that she will seek proper treatment for her depression. They work together to become a stronger and happier family. 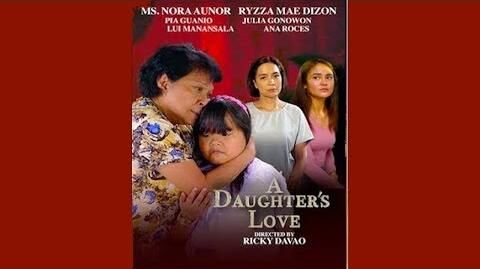 Retrieved from "https://eatbulaga.fandom.com/wiki/A_Daughter%27s_Love?oldid=34987"
Community content is available under CC-BY-SA unless otherwise noted.