54 minutes
"Haligi ng Pangarap" is the second Holy Monday episode of the 2018 edition of the annual drama anthology Eat Bulaga's Lenten Special. It succeeds the episode "My Carinderia Girl" in the Monday lineup. The episode aired on 26 March 2018 with a total runtime of 54 minutes.

Directed by Adolf Alix, Jr., "Haligi ng Pangarap" is a story of an OFW father whose faith, patience, love, and dedication are tested when his son becomes involved in a debilitating accident.[2]

Andrei (Alden Richards) video chats his father Lito (Tirso Cruz III) who is currently working as a seaman abroad. He assures his father that he will no longer have to work once he passes his board exam and finds a job. Andrei makes his father promise to return home for his graduation, hoping that he would be the one to put a medal around his neck.

Days before Andrei's graduation, Lito suddenly passes out which forces him to cancel his flight home due to his weakened state. Feeling disappointed, Andrei goes to the graduation ceremony with his grandmother and uncle instead. On his way home after a dinner celebration, the new graduate almost gets hit by a motorcycle while walking in the middle of the street. Enraged, the aggressive bikers attack Andrei who falls down and strongly hits his head on the curb. The assailants drive away while Andrei is rushed to the hospital.

Lito learns about his son's critical condition and decides to go back home. The doctors reveal to the family that Andrei is in a coma because of a traumatic brain injury. Andrei is miraculously revived by the doctors after flatlining. He later regains consciousness and his health improves enough for him to be discharged.

At home, Lito helps his paralyzed son move around the house and promises to do whatever it takes to get their life back to normal. He contemplates about returning abroad to help with the medical expenses, but ultimately decides to just borrow money from a family friend in the meantime.

After repeated therapy sessions, Andrei gradually recovers from his paralysis. One day, he stands up and walks with the help of a walker, when he notices his father's passport and travel documents on a table. Assuming his father is leaving once again, Andrei begs him not to return abroad, feeling distraught by his father's constant absence from his life. Lito tearfully describes the unavoidable sacrifices that he makes and the terrible homesickness that he feels as an overseas Filipino worker (OFW) just to provide a better life for their family. Recognizing his selfishness, Andrei later apologizes for not appreciating his father's hard work abroad and thanks him for everything he has done for their family. He shows the medal that he received during his graduation and deservingly awards it to his father instead. 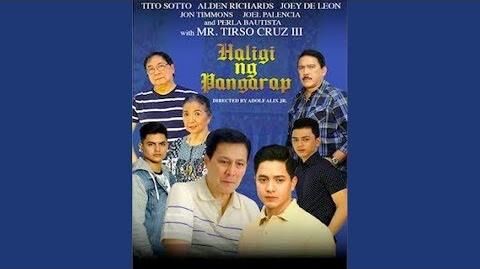 Retrieved from "https://eatbulaga.fandom.com/wiki/Haligi_ng_Pangarap?oldid=34709"
Community content is available under CC-BY-SA unless otherwise noted.