58 minutes
"Hating Kapatid" is the first Holy Wednesday episode of the 2018 edition of the annual drama anthology Eat Bulaga's Lenten Special. It precedes the episode "Taray ni Tatay" in the Wednesday lineup. The episode aired on 28 March 2018 with a total runtime of 58 minutes.

Each year, the anthology replaces the noontime show's regular programming in observance of the solemnity of Holy Week. Standalone episodes of short dramas are shown from Holy Monday to Holy Wednesday, with each episode having different characters, story, and director. A total of six Lenten episodes were produced and released for the 2018 edition.[1]

Directed by LA Madridejos, "Hating Kapatid" is a story of friendship between two professional boxers and the things they are willing to sacrifice to keep that special bond forever.[2]

Growing up, young friends Rico and Elmer already exhibit great fighting skills as they compete in street boxing matches. The two friends aspire to become professional boxers in order to get themselves out of poverty. In the meantime, the prizes from the street matches become their way of helping out their poor and broken families.

Now an adult, Elmer (Wally Bayola) has become a professional boxer who is training again after his hiatus from the boxing ring. He is accompanied by his son Abet (Miggy Tolentino) and his best friend Rico (Jose Manalo), who is now a retired professional boxer. During his training, a news reporter interviews Elmer about his alleged gambling addiction, which he quickly dismisses as a rumor. However, Rico is concerned since he knows the truth about his best friend's gambling problem. Elmer assures Rico that there is nothing to worry about.

Elmer buys a mansion and adopts an extravagant lifestyle. He gambles more and more with his new wealthy friends whom he already owes large sums of money to. They encourage him to fight in an underground boxing match for a larger cash prize. He accepts.

Abet confronts his father about his large gambling debt after Rico informs him about it. In retaliation, Elmer fires his entire boxing team and challenges Rico in a boxing fight. During the fight, Elmer accuses his friend of jealousy and calls him a traitor for not supporting his new lifestyle. Rico knocks Elmer down and leaves.

With no proper training team, Elmer is defeated by knockout on the night of his underground fight. His problem worsens after his gambling friends kick his family out of their mansion as payment for his multimillion-peso debt. Elmer collapses and is rushed to the hospital. The doctors diagnose him with end-stage renal disease, needing a kidney donor immediately. Fortunately, they quickly find a matching donor.

He apologizes to his former boxing team who became his only visitors in the hospital. Rico reveals to his friend that he is the kidney donor. Elmer is remorseful for what he has done and is thankful for his best friend for giving him a second chance in life. 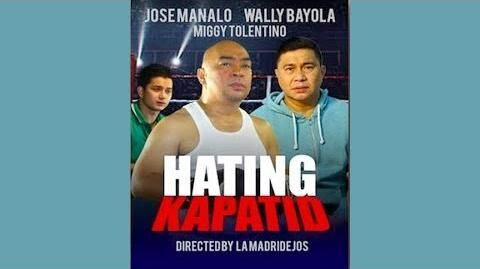 Retrieved from "https://eatbulaga.fandom.com/wiki/Hating_Kapatid?oldid=34707"
Community content is available under CC-BY-SA unless otherwise noted.