July–September 2017
Miss Millennial Philippines 2017 is the first-ever edition of the beauty pageant for female beauty queens from the millennial generation who are beautiful, talented, and intelligent. The segment premiered on 29 July 2017 and concluded on 30 September 2017.

Unlike typical beauty pageants, Miss Millennial Philippines places a great emphasis on the culture of the provinces and cities from which each of the thirty-eight candidates originated.

Throughout the pageant's run, candidates provided a tour of must-see destinations, showcased local delicacies, and promoted the world-renowned Filipino hospitality. The pageant's goal is to make Filipinos realize how beautiful the Philippines truly is.

Julia Novel Gonowon of Camarines Sur was crowned as the first-ever grand winner of Miss Millennial Philippines, winning against thirty-seven other candidates.

Eat Bulaga! tapped local pageant titleholders from across the Philippines and challenged them to represent their hometown in a competition that is first of its kind in local television.

The first edition is part of Eat Bulaga!'s celebration of its thirty-eighth anniversary. Hence, the pageant featured a total thirty-eight candidates from different provinces all over the Philippines.

All of the thirty-eight candidates of Miss Millennial Philippines 2017 were introduced on 29 July 2017 during Eat Bulaga!'s thirty-eighth anniversary celebration.

In the following weeks, the thirty-eight candidates appeared one by one for the public to get to know them and their provinces a little better. Each day, the hosts interviewed the featured candidate with a great emphasis on the beauty of their provinces. The candidate also brought delicacies and other local dishes to share with the hosts and the studio audience.

A short promotional video co-produced by the province's tourism department was also shown during the interview featuring the rich culture and the various tourist destinations of the candidate's province. The videos were shared on Eat Bulaga!'s various social media accounts.

All candidates were also given weekly challenges that required them to produce creative and eye-catching online content. These materials were uploaded on the show's social media accounts as well.

The prejudging round was held on Wednesday, 27 September 2017. Hosted by Ruby Rodriguez and Allan K, the two-hour event was live streamed on Eat Bulaga!'s official YouTube channel and was not broadcast on television. The prejudging round determined the Top 10 candidates.

No decision was immediately announced at the end of the round. Announcement of the Top 10 was made on Saturday during the grand coronation day.

The grand coronation day was held on Saturday, 30 September 2017 at the 15,000-seater Mall of Asia Arena in Pasay City, Metro Manila. The episode was solely dedicated to the coronation of the pageant; no other segments were aired that day.

For the final time, the thirty-eight candidates took their introductory walk during the opening presentation of the pageant. Each candidate wore the crown from the local beauty pageant that they won prior to Miss Millennial Philippines.

After the introductory walk, the thirty-eight candidates were narrowed down into the Top 10 based on the results of the prejudging round. The Top 10 finalists were Jasmin Bungay, Carina Cariño, Berjayneth Chee, Shiara Joy Dizon, Julia Novel Gonowon, Eleonora Valentina Laorenza, Sarah Elizabeth Madrigal, Sofia Jane Panapanaan, Allyza Molly Teodoro, and Anie Uson 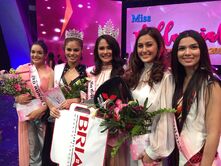 The Top 10 finalists underwent a final question-and-answer portion. Their wit and intelligence were tested with questions provided by several Filipino netizens from all over the world. Contestants were given one minute to provide a response.

Julia Novel Gonowon was hailed as the first-ever grand winner of Miss Millennial Philippines 2017. She took home ₱500,000, a condominium unit from Bria Homes, and a 2017 Mitsubishi Montero Sport.

The first runner-up, Carina Cariño of La Union, was awarded ₱150,000. Meanwhile, Eleonora Valentina Laorenza of Aklan took home ₱100,000 after being declared as the second runner-up. Shiara Joy Dizon of Malabon City placed as the third-runner up and won ₱75,000.

A special prize of ₱100,000 was also awarded to the Bayanihan Queen, which received the highest number of combined online and text votes. The award was given to Dianne Irish Joy Lacayanga of Ilocos Norte. In addition, a chosen project in her province also received support worth ₱1 million.

Below is a list of hosts who have handled the segment at some point in its run. This includes main, co-, substitute, and one-time presenters.

The grand coronation day was held on Saturday, 30 September 2017 at the Mall of Asia Arena in Pasay City, Metro Manila. The show was broadcast live on television.

The thirty-eight candidates were narrowed down into the Top 10 based on the results of the prejudging round. The ten remaining finalists then competed for the last time in the final interview portion.

A total of 38 contestants competed in the first edition of Miss Millennial Philippines. The contestants are listed in alphabetical order based on their last names.

Community content is available under CC-BY-SA unless otherwise noted.