66 minutes
"My Carinderia Girl" is the first Holy Monday episode of the 2018 edition of the annual drama anthology Eat Bulaga's Lenten Special. It precedes the episode "Haligi ng Pangarap" in the Monday lineup. The episode aired on 26 March 2018 with a total runtime of 66 minutes.

Directed by Linnet Zurbano, "My Carinderia Girl" tells the story of an older woman who falls in love with a much younger man. Despite the criticisms, the two will prove that love is accepting and knows no age.[2]

Ces (Ruby Rodriguez) owns a popular eatery frequented by local residents and passersby. Loyal customers tease her that her cooking is good enough to attract any man, to which she responds that she has accepted her fate as an old, chubby, and single woman. She asks her assistant to deliver an order to a nearby office building.

During lunch break, Alfred (Kenneth Medrano) admires the taste of the food ordered by the office's kitchen staff. He writes a note to be given to the eatery's owner praising her culinary skills. Ces receives the note and writes back to thank Alfred for the appreciation. Ces and Alfred unexpectedly become pen pals, writing more notes to one another.

One night, Alfred passes by a local eatery and sees its owner handing out leftovers to the local street children. Witnessing the altruism, Alfred offers to purchase all of the sampaguita garlands being sold by the same children. He then strikes up a conversation with the owner, both of them appreciating their kindness to the poor. Ces rewards him with a box of leftovers and offers to join him at a table. While eating, Alfred notices the heart-shaped vegetables and realizes that Ces is the eatery's owner. Ces is stunned when Alfred utters her name, recognizing that Alfred is also her mystery pen pal. The two become friends.

Later, Alfred shows up at the eatery and confesses his feelings for Ces. Stunned and overwhelmed, she rejects his request to court her and cites their large age gap. Ces later changes her mind and finally gives him a chance.

Alfred's sister Eloisa (Luane Dy) flies to Manila for a surprise visit. Alfred immediately introduces Ces to his sister, who stared at the eatery owner with confusion and disapproval. Eloisa confronts Ces and Alfred, denouncing their relationship and warning Ces to stay away from her brother.

Over time, Eloisa warms up to his brother's relationship after seeing him actively defend Ces. She meets with Alfred to let him make her understand his situation. Alfred returns to Ces to tell her about his sister's blessing. At first, Ces still pushes him away, believing her decision is for the better. Her eatery's employees convince her to fight for what she loves.

The street children lead Alfred to Ces' eatery. In front of her customers, Ces finally confesses her love for him and her newfound strength to fight for their relationship. 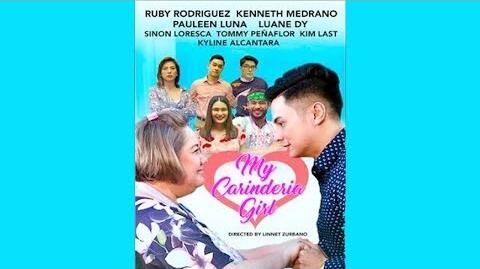 Retrieved from "https://eatbulaga.fandom.com/wiki/My_Carinderia_Girl?oldid=34700"
Community content is available under CC-BY-SA unless otherwise noted.