52 minutes
"Panata" is the second Holy Tuesday episode of the 2016 edition of the annual drama anthology Eat Bulaga's Lenten Special. It succeeds the episode "Walang Kapalit" in the Tuesday lineup. The episode aired on 22 March 2016 with a total runtime of 52 minutes.

Each year, the anthology replaces the noontime show's regular programming in observance of the solemnity of Holy Week. Standalone episodes of short dramas are shown from Holy Monday to Holy Wednesday, with each episode having different characters, story, and director. A total of five Lenten episodes were produced and released for the 2016 edition.[1]

Directed by Jose Javier Reyes, "Panata" follows the the story of a family who suddenly finds itself completely broke. Despite losing everything, a father continues his vow to share his blessings with those in need, which his spoiled children has yet to appreciate.[2]

Moises (Vic Sotto) is a well-off businessman who spends his free time distributing food to street children. On his way home, he sees a lonely child named Sarah (Ryzza Mae Dizon) being bullied by other street children for stealing their sleeping spot. With Sarah having nowhere else to go, Moises decides to take her home.

Teresa (Danica Sotto) and Daniel (Oyo Boy Sotto) discover that their father has brought another orphan into their house. They complain to their father for being too charitable and insist that Sarah's well-being is not his responsibility. Moises defends his generosity against his spoiled and unappreciative children.

Moises receives a phone call that their company is on the verge of bankruptcy and that his bosses have run away with all of the company's money. Investors storm his house demanding that their investments and commissions be returned immediately. He decides to sell the house and his other properties in order to pay the investors back, leaving his family with no choice but to start over. Moises brings the two orphans with him to their new and smaller apartment.

Now living in poverty, Moises and his children get into a heated confrontation. Daniel calls his father a loser because his excessive generosity has brought them nothing in return. Moises punches his son for his disrespectful remarks. He acknowledges that living in poverty is difficult and that he dreams of returning to their previous life. However, helping the less fortunate is his personal vow where he never expects anything in return simply because he believes that it's the right thing to do. He accuses his children of not appreciating his efforts and using him only when they need something.

Daniel and Teresa realize their mistakes after their friends start ignoring them once they lost all of their fortunes. They return home to wholeheartedly apologize to their father. To show their support, both siblings begin to help their father distribute food to street children. 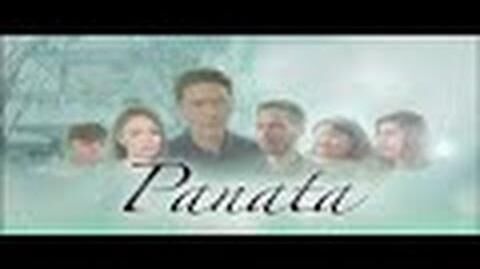 Retrieved from "https://eatbulaga.fandom.com/wiki/Panata?oldid=34035"
Community content is available under CC-BY-SA unless otherwise noted.