2003–2021
Liana Pia Coronado Guanio-Mago, more commonly known as Pia Guanio, is a Filipino television host and model. She currently hosts the noontime show Eat Bulaga! and has been since 2003.

Her last appearance on Eat Bulaga! was via Zoom teleconference on the noontime program's 42nd anniversary celebration on 30 July 2021. Afterwards, she was tapped to host the morning talk show Kada Umaga aired on NET25.

It is speculated that Pia is no longer part of Eat Bulaga! for failing to appear on the program for four months, and most especially, during the release of the music video Eat Bulaga!'s Christmas song "Parating Na Ang Pasko" which was attended by all of the current hosts of the noontime program. 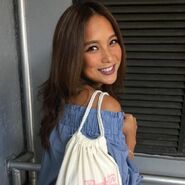 Guanio in the set of 24 Oras
Community content is available under CC-BY-SA unless otherwise noted.
Advertisement